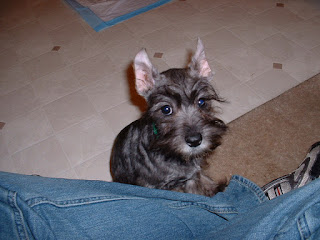 Yes, it is official. Sarah and I have a new dog. His name is Gizmo and he is another miniature schnauzer. This picture is his first night at my apartment. He is 14 weeks old there. He has been a blast. He has been awesome so far. He is quickly becoming housebroken, he sleeps through the night (in a kennel), and he and Spanky are getting along well. The two of them like to wrestle each other for hours at a time! He has been a blast.
On to other news, since it has been a while since I put anything on here. Wedding planning is going well. We have our church, reception hall, flowers, cake, DJ, photographer, tuxes, wedding dress, and bridesmaid and flowergirl dresses set up. Things are definitely falling into place. Planning a wedding is way too stressful for my tastes. Besides the obvious reason, I think I would avoid divorce just to avoid planning another one of these! Thankfully, Sarah and I have had an extended engagement, which give us more time to do everything. I have no idea how people do all this in a couple months! To top everything off, we are also house shopping. House shopping makes wedding planning look like a jog in the park! The good news is that we found a lender we are comfortable with and we are closing in on a house we like. Then the fun (haggling) begins! Thankfully, Harry's mom, Debbie King, has been helping us out a ton. We both went into this blind, having never bought a house before, and Debbie has been an incredible asset. I'm pretty excited to get into a place where I can live for more than a year. Plus, my house won't have roommates that get married and leave me stranded (thanks John and Robert!).
What else? I just finished a great book the other day. It is a book Kato got for me for Christmas that is called "Rat Pack Confidential" by Shawn Levy. It is an incredible, behind-the-scenes look at the Rat Pack (and more specifically, Frank Sinatra). Being a big fan of those guys, it was a page turner for me. Shawn Levy had a lot of information that people do not (or will not) put into biographical literature. He wasn't afraid to bring up the political connections, the mob connections, the fights, the infidelity, the drinking, the gambling, the partying. It showed the true colors of what was then the most powerful group in the United States. Very good book. I would recommend it.
I'm currently reading Bill O'Reilly's newest book, "Culture Warrior". Although I don't necessarily agree with Bill on all topics, his books are always good reads. He is unabashed at calling out people for doing wrongs either against an individual or against our country. He tells it like it is. I have a great amount of respect for the man, regardless of his opinions. I'm a little past half way through the book. I'll let you know how the rest of it goes when I finish it.
The month of February is awesome. The Super Bowl. The Daytona 500. The skiing. The ridiculously awesome depth of the snow on the ground in Denver. Spring training being only a month away. Ahhhhh.
Posted by Mikey at Thursday, February 01, 2007