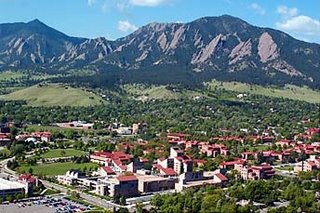 It looks nice, doesn't it? The Flatirons right against the town. The red roofs of the University. Too bad the city of Boulder is trying to keep a secret from all of us. Fortunately, this secret has been revealed to everyone in Fort Collins. . . Boulder sucks. Hard. Really, really hard. Let's take a serious look at that city the past 10 years. What good has come out of that? You have the JonBenet case. You have the Churchill issues. You have the recruiting violations. You have Katie Hnida. Gary Barnett. Ricardo Patton. 4:20 celebrations. The worst fans in college sports. The Boulder Police Department. University officials owning liquor stores. Betsy Hoffman. Riots. Burning couches. The "term of endearment". Racist CU athletes sending racist emails. Number one party school rankings.

The crazy thing is that I'm sure I'm missing a lot more examples. What a dirty, hippie-filled, terrible place. Every day that I hear more crap about that school, the more thankful I am that I am a Ram through and through.
Posted by Mikey at Monday, August 28, 2006 6 comments:

I am creating this post at work. Yes, I am at work. No, I am not wasting company time. I am currently in training for InRoads, a roadway design software. I have been using InRoads for a while now and this is the "advanced" training, but we are still talking about things that I already know how to do. This makes for a boring time. I figured I would make my time worth something and blog for the first time in a while.

There are a couple things of importance going on in my life right now:

Yesterday I had the distinct pleasure of taking the three hour car ride (one way) to Torrington, Wyoming. HDR is doing an Environmental Assessment for the Town of Torrington to determine the environmental implications of a new bypass that would go over the railroad tracks through town. These EA's require public involvement, so every once in a while HDR representatives head up to the towns for these public meetings to present information to the townspeople, to listen to any comments the townspeople might have, and to answer any questions. Since my direct boss is managing these projects, I get the opportunity to join her in Wyoming to get yelled at by small-town people for ruining their towns!! (That actually only happens in one of the six towns we visit. Torrington people are really nice.)
So back to the story. . . the town reporter for Torrington always comes to the Torrington public meetings. I have found, through my various trips up there, that he is not the brightest person in Wyoming. And I am not the only one who has noticed this personality trait. A member of the Wyoming Department of Transportation deals with this reporter on a fairly frequent basis. Apparently, last week, this reporter called this WYDOT person three times in one day. The first time, the WYDOT guy answered all his questions. The second time, the WYDOT answered all of the same questions from the first call. By the third call and the third set of similar questions, the WYDOT guy really stressed a certain piece of information that the reporter didn't seem to comprehend. On this call, the reporter started to understand what the WYDOT guy was getting at. The reporter asked where he could see the information. The WYDOT guy told him that the easiest way to find the information is to "Google" it and it should pop up. The reporter told the WYDOT guy that that method would not work because "his Google wasn't working very well".
Yes, the reporter did say that his Google wasn't working very well. Does anyone have any idea what that means? Did he mean that his internet was slow and as a result his Google search was expectedly slow? Did he mean that the version of Google that is brought up on his machine was not working properly? Can this happen with any website at any time? Will my ESPN.com not work well some day? I sure hope not! Please let me know what this means, if you have any idea!
Posted by Mikey at Friday, August 18, 2006 No comments:

I have decided that they go far too quickly. Seriously. I am sitting at my computer and it is 10:30 on Sunday night already. It was just Friday. I need some time!!!

Also this weekend, I decided that I need a digital camera. I don't take nearly enough pictures in my life and I think the major reason for that is the lack of a good, quick, and painless way of dealing with photography. Take some pictures, plug into computer, upload, view. That simple. Then I could add some pictures to this incredibly boring blog site. Don't get me wrong, I would love to get my hands on a Nikon film camera that I can mess around with. But for everyday stuff, a nice D50 would be quite handy. . .
Posted by Mikey at Sunday, August 13, 2006 No comments:

Sorry all three of you who read this. I have had a very hectic last few weeks. After the Flick family reunion, we returned to Denver for a week. On the 24th, my grandmother (my Dad's mom) died from her quickly spreading cancer. Thankfully, my Dad and his 10 brothers and sisters were all out there the weekend before she passed away. They were all able to help my grandpa and each other cope with the loss. Mom, Dad, and Matthew were still in the Twin Cities, so Sara, Katie and I hopped on a plane on the afternoon of the 25th for the funeral. On Wednesday, we had a visitation in the church preceding the funeral mass. We then processed out to the cemetary and had the burial. After the cemetary, we went to a local church for a luncheon that my family had set up. After dropping off my Grandpa at his home so he could get some sleep, we headed over to my aunt's house for some family time. We didn't leave there until late into the night. All in all, it was a sad day. At the same time, we got to spend a ton of time with the family and we got to hear story after story about Grandma, Grandpa, and all the exploits of the 11 children. Needless to say, I was exhausted after that day. Plus my flight out of Minneapolis was at 6:00 the next morning. I got home Thursday morning, went into work for just a few hours, and called it a day.

Friday was already a vacation day, as it was the day before Robert and Natalie's wedding. We played golf in the morning and then had the rehearsal and dinner that night. (As a sidenote, I hit a 310 yard drive on one of the par 5's at Englewood Golf Course. I am just as amazed as you!) Saturday was Robert and Natalie's wedding. Sunday, I flew to Phoenix. After an early dinner with my uncle and a giant bucket of balls at the local course, I had a couple days of HDR's Transportation Conference. Almost 800 of HDR's transportation staff came to Scottsdale for presentations and networking and social time. I had a blast, learned a ton, and met more people than I could possibly hope to remember. Thankfully, that will be my last trip for a while. The only thing I have in the future is a trip to Vegas the first weekend in September. Poor me. I have to go to Vegas!

As for the last week, I have been working and watching the Rockies. That is about it. Not too much time for anything else. Thankfully, tonight they finally won against those red-hot Dodgers. That puts them at 3 games out of the NL West lead. And the Wild Card is just as easily within their grasp. As for the Twins, they keep slugging out wins. After tonights victory (coupled with the White Sox loss to the Yankees and the BoSox loss to the Royals), the Twins now lead the Wild Card race by a 1/2 of a game. On June 8th, they were 11 games behind the Wild Card leading White Sox. They have made up a little ground since then. The biggest baseball news for me, though, has to be Justin Morneau's 30th home run this season. The Minnesota Twins have not had a 30 home run hitter since 1987 when they had a few. It was the longest streak in the major leagues by over 10 years. It was pathetic. Justin Morneau has changed all that. Thank you, you monster of a Canuck!

Big congrats to Cake on their engagement. I wish you both the best.
Posted by Mikey at Wednesday, August 09, 2006 No comments: