Last night we had yet another Guy's Night Out game for this season. The game was a good one, despite the fact that the Nationals are the absolute worst in the league. Jason Hammel didn't pitch very well, the Rockies didn't hit or field well, and the Nationals played like. . . well. . . the Natinals. The game ended up being tied at 4 at the end of the 4th inning. The excitement started later.

In the 8th inning, Alan Embree entered the game with 2 outs and Austin Kearns on first base. Embree, a lefty, toed the rubber, looked toward home plate, then fired a bullet to Todd Helton at first. Kearns was caught, started running toward 2nd. Helton dropped the ball, picked it up, chased after Kearns, who had fallen in the baseball. Kearns then got up and started going toward 2nd again. Helton tossed the ball to Tulowitzki, who was covering 2nd. Tulo chased Kearns back to 1st, tossed the ball to Embree, who had joined the pickle. Embree then tagged Kearns for the final out. It ends up being scored as a 1-3-6-1 putout. Inning over. The Rockies get a run in the bottom of the 8th, Huston Street comes in and sits 3 batters down and the Rockies get the W. Winning pitcher for the Rockies? Alan Embree. The guy who threw exactly zero pitches. Pretty cool thing to see.

After the game, we were trying to figure out if that had happened before. Thankfully, the Rockies website had the answer to our question. The last time a pitcher won a game without throwing a pitch was May 1 of 2003 (B.J. Ryan being the pitcher of record). There have not been any other instances of this happening in the last 23 years.

Needless to say, it was pretty cool to see in person. I think the best part of the story is what Jim Tracy said to Embree when he walked off the field. "You're done. Do you think you can go tomorrow?" Awesome. Hopefully he didn't have to ice his arm after such a heavy workload! 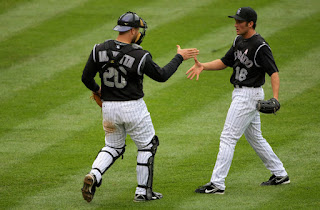