Apologies for the delay - between life and work, I have not had time to get this thing updated. Without further ado, the final Ram Recap of the Mike Bobo era...

The early afternoon Black Friday football game and corresponding morning tailgating caused the Flick family to be more proactive about game day planning than usual. The scheduled 8:00 am departure on Friday forced us to organize our gear on Thanksgiving before any family festivities began. With the cold and snowy weather forecast, I set about packing our gear with a high probability that Sarah would skip out at some point. Sarah and I gathered our warm weather gear for us and the kids and piled the tailgating supplies in the garage before heading over to Sarah's grandma's house for Thanksgiving dinner. There were no comments from the wife about staying home.

The next morning, it was a brisk 19 degrees as I began packing the van. Tables, grills, stoves, gas canisters, and piles of warm clothes and blankets were stacked in the back of the car. There were no comments from the wife about staying home.

The kids were jostled awake and long underwear and warm clothes were layered on small bodies. They slapped on their winter boots and headed to the packed car warming in the garage. There were no comments from the wife about staying home.

The house was closed up, the dogs were kenneled, and Sarah and I wandered out to the garage to drive to Fort Collins. She really was coming...

Despite leaving 40 minutes after we planned, we still were the only people in Lot 445 when we arrived. The Nelsons arrived shortly after. The Turgeons and Landrys (and Keith's propane heater) followed quickly behind. We were ready for CSU's "bowl game" as Mike Bobo had previously dubbed this Ram/Bronco matchup.

Boise State entered the contest already having clinched the Mountain Division of the Mountain West Conference. With their ticket already punched to the MWC championship game against the Rainbow Warriors, Boise was playing for something much bigger -- consideration for a New Years bowl game. CSU maintained contact with the ranked Broncos, but Boise State was able to maintain a lead for much of the game. While the seven point loss did bisect the spread, the Rams loss left them at 4-8 on the year and with questions lingering about the future of the coaching staff. 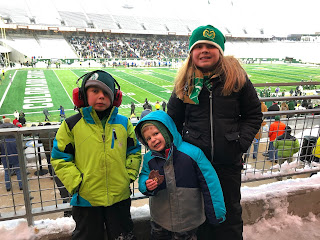 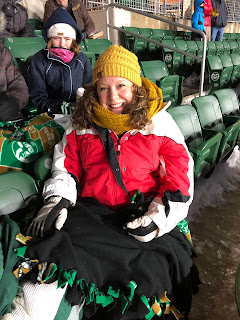 Had my picks been an actual football team, the final tally (8-4) would have been decent enough to receive an invitation to an early bowl game against the Western Michigan Chippewas.

As for the actual football team, the 4-8 record in season number five was the final nail in the Mike Bobo coaching coffin. On Wednesday, December 4th, Mike Bobo and CSU mutually agreed to part ways (with a shockingly low $1.82 million buyout) and Mike Bobo is no longer the head coach of the CSU football team. His offensive acumen quickly landed him a new gig as the offensive coordinator at the University of South Carolina. The Rams coaching search landed on Steve Addazio, the former Boston College head football coach. More on the entire coaching swap in a later post...

I enjoyed doing this again this season: I hope you enjoyed following along. May the 2020 Ram season start with a strong showing against our neighbors to the south up at Canvas Stadium.