This was going to officially be the shortest break between posts that I have ever experienced until I hit a bit of a snag. I have been struggling with creating a watermark in Photoshop. While I don't think that my pictures are incredibly, I don't think I would appreciate people using them without some sort of credit. Hell, if Conan's 'Masturbating Bear' and 'Triumph the Insult Comic Dog' are considered intellectual property, I think a few shots from my camera can be considered property as well! Despite all the Photoshop problems, the truth is this: I did not lie, people. I really do plan on doing this much more frequently.

Let's get this frequent posting started with something that is near and dear to my heart: photography.

First the background. . . My father, as most people are aware, is a civil engineer like me. What people do not know about Papa Flick is that prior to becoming a civil engineer, his professional path approached a far different land. Papa Flick started his college education as a photojournalism major. In fact, he finished his first go-round of his college education as a photojournalism degree holder. Once he had the degree and he faced the cruel reality that not every photojournalism major was going to work for National Geographic, he went back to school to start down the nerdy path of civil engineering. Regardless, his love for photography stuck with him through his marriage, moves, kids, more moves, new companies, new states, new stages of life. Papa Flick's appreciation of this photographic craft rubbed off on me. Growing up, photography always appeared in our daily lives. Our bookshelves held books on Ansel Adams and Steve Tohari. We could not leave the house for even a day trip without Dad's 1970's Nikons in his camera bag. I have seen every volume of National Geographic. Ever. When he finished our basement, he made an office/darkroom in one corner so he could develop his black and white film. It is fairly easy to see how photography has ingrained itself into the essence of who I am.

When I finally had some money to burn, I got my own cameras and started shooting. I shoot with both a Nikon D60 and a Nikon N80. The N80 is always loaded with black and white film. I am a sucker for black and white and I am an old stick-in-the-mud, so I really like shooting the classic film camera. It adds a degree of difficulty as you don't know if you have the correct exposure until you process the film. With the digital camera, you just chimp at the LCD to see how it looks. Totally different approach. A majority of my shots are done with my D60. I am currently working on becoming a better photographer with the film camera. Hopefully we will be able to see marked improvement in my film frames in 2010.

Here are a couple of my pictures that I really enjoy. These were taken before I started aggressively relearning all my photography knowledge. As time passes, I will do a better job of noting the camera, lens, aperture, and shutter speed of each shot. I find that interesting and I'm sure there are several people who read this who would appreciate the technical side of the shots.

This first shot was taken on a work trip down to the Grand Canyon. We were doing a redesign of the road that goes out to Hermit Rest. On our trip out there, I had the work camera (which is really a crappy camera) and we walked the entire project, which included a bike/ped path along the canyon rim. Walking in the cold fog, I came across this fallen tree and had to take a picture. Not really related to work, but I am glad I stopped. 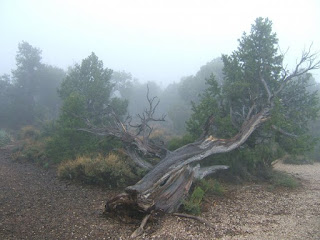 This next picture was taken on our trip out to Washington state last November. We were visiting some friends in Bellingham, WA for the weekend. They took us on the ferry from Anacortes out to the San Juan Islands. The ferry ride started in the afternoon and we reached the islands as the sun started to set. I took numerous pictures of the sun setting around the islands and this one is my favorite one. If you are my friend on Facebook, you have already seen it as it is my profile picture. 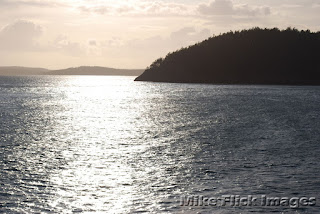 The last picture I want to share is one that was a complete spur of the moment picture, but I enjoy it for many reasons. For Sarah and my first wedding anniversary, we went up to Estes Park, CO for a weekend to stay in a bed and breakfast. During our stay, we managed to sample all the local flavors of beer and wine. We started late in the morning by going to the first winery. We were told they opened at 10:00. We got there at 10:50 and the sign said that the winery would open at 11:00. To kill a few minutes, we just sat in the car and chatted. I had the camera and I was playing around with it. I focused on the Rockies guy and snapped a picture. Maybe it is because I am a Rockies fan or maybe it is because I was enjoying myself with my wife of a year or maybe it is actually just a fun photograph, but I absolutely love this picture. Go Rockies!! 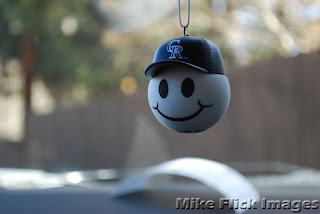 Phew, now that the first one is out, the rest should be incredibly easy!

That's pretty cool that you shoot film as well as digital. I'm not even sure I would know what to do with a film camera.