This past year has made it quite clear: in my world of sports, I am not allowed to have nice things. To recap, the Rockies closed out a dismal 2014 season, the Pepsi Center sat empty over the winter as the Nuggets and Avalanche both missed the playoffs, the Broncos turned a successful regular season into a massive face plant in their first playoff game, and the Rockies started yet another disaster season at the bottom of the NL West. All of this ineptitude peaked with the Bombers of Blake Street making the biggest front office movement of their last five years - they traded Troy Tulowitzki to the Toronto Blue Jays.

Tulo was a second overall pick of the draft, a rapidly rising star in the minor leagues, and a Rookie of the Year candidate in 2006. His play helped vault the Rockies to their first and only World Series in 2007 and was the face of the Rockies as Todd Helton's value declined at the end of his career. And I loved his game. The upright batting stance, the ranging defense, the cannon arm, the power at the plate, the win-or-die mentality. He had weaknesses (the moronic TOOTBLANs and his uncanny ability to tear himself apart) but watching Tulo play baseball for MY team was a joy. If you parked yourself in a seat at Coors, you were going to watch a guy play his butt off for the entire game even if it meant that he injured himself in the process. When he was healthy, he played both sides of his position better than any other player in major league baseball.

But even with Tulo, the Rockies were still not winning. I have frequently criticized the front office for holding onto their assets for too long. Brad Hawpe was worthless when the Rockies finally wanted to move him. Garrett Atkins was the same way. Even the great Todd Helton was held on the roster for far too long at times when other teams were clamoring to add him to their lineup as a rental for their final playoff push. The front office, whether it is Dick Monfort or Dan O'Dowd or Bill Geivett controlling the moves, has always been reluctant to get rid of their chess pieces. Jeff Bridich's trade of Tulo hopefully signifies a change to this ever-present mentality. No one should be safe on this roster. They must break it down before they build it back up.

The news of trade knocked the air out of my chest. Shock settle in as the news unfolded. I did not think that Bridich would move Tulo, mostly because Monfort would not let that happen. But there I was, sitting awake in my bed well into the night reading anything I could find on the deal as detail emerged. One of my all time favorites was not longer on my favorite team. It sucked. I was upset. This was a top tier MLB talent taken from me. But at the same time, I knew that it needed to happen. The organization needed (and still needs) quality pitching and three young arms were included in the deal.

Maybe I'm only allowed to have nice things in potential form.

A few days after the Tulo trade, it was announced that my favorite columnists from the Denver Post was leaving the Rocky Mountains to opine for the St. Louis Post-Dispatch. The Post-Dispatch is the hometown paper of Benjamin Hochman and the opportunity was one that he could not pass up. For a sports fan in Denver, I am going to miss the multi-media presence of Ben. His columns were not typical of a sports journalist. His series on baseball this summer spanned nine "innings" of obscure baseball stories, each more interesting than the next (1st Inning, 2nd, 3rd, 4th, 5th, 6th, 7th, 8th, 9th). A typical sports columnist does not use their platform to defend gay people or support marijuana usage among professional athletes, but Ben wrote unabashedly with quirky humor and Wu Tang references. Ben is the most accessible local reporter on Twitter, responding to anyone interested in some banter. Interacting with faceless sports fans on the internet could be a tiresome burden, but he acquiesced to our constant pestering. Nothing improved my long drive home after work more than turning on 105.5 ESPN to hear Ben co-hosting the Locker Room with Nate Kreckman. My dream of drinking beers and arguing about sports with Ben and Nate and Nick Groke will be tougher with Ben residing 850 miles away. 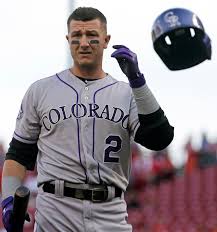 Maybe Toronto and St. Louis are allowed to have nice things.
Posted by Mikey at Wednesday, August 19, 2015

Follow this link to discover probably the most generous Red Dog Casino bonuses. Overall, we were pleased with the game library of Red Dog Casino. While we would like to see a more diversified library, no matter is available at Red Dog ought to be enough 카지노사이트 for almost all} of the gamblers. Follow this link to discover more about Ignition & its bonuses.