The weather should have been the first indicator of things to come. What was expected to be a gorgeous, cool, fall day in Fort Collins ended up being cold and blustery. The wind during our tailgate attempted to rip away our canopy and forced sweatshirts and jackets to emerge earlier than anticipated. We figured the stadium would provide a respite from the wind, as our seats force our backs to the west and the bleachers and press box provide a tall shelter. Somehow, physics declined cooperation and the wind swirled around our seats throughout the game. Moments of calmness were fleeting and welcomed, however brief they were. Our hats and gloves and jackets and hoods and blankets battled the entire game, but were overcome at the end of the third quarter and we headed home. The cold weather and bad football team gave us a great opportunity to explore the stadium - going to the top corner of our section and giving us some cool shots. 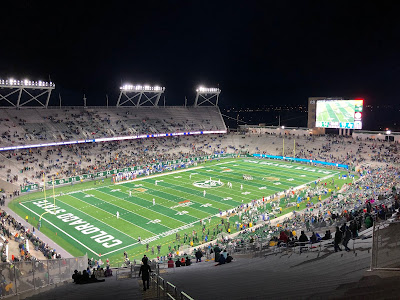 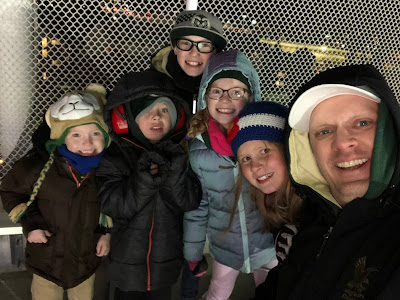 If you are a regular reader of this website, you may remember the first bullet in The Positives section of the UNLV recap was all about the success of the Rams being tied to their early offensive outbursts. This weekend followed that script exactly - finishing the first quarter up 14 - 0 over the Falcons. Great! Then the Rams decided to do nothing else offensively for the remainder of the game, let Air Force rattle off 24 unanswered points, score a late touchdown to make it interesting, then end the game dramatically by giving up a 99 yard interception return for a touchdown as the clock showed less than 2:00 remaining in the contest. Not great. Another trophy going back to a rival for anther year...

Fewest missed tackles as a team, through 11 weeks:

The good news is that the Rams still have a mathematical chance to work their way into a bowl game. The bad news is that the probability and likelihood of that happening is damn near zero. Wyoming played Boise State on the Smurf Turf earlier this month and ended up losing to the Broncos in overtime. I watched a chunk of that game and commented during the broadcast that I could not see how CSU beats either of those teams. After watching CSU against Air Force, I stand by that statement. Sorry Mikey from before the season started, your predictions are going 1-1 the remainder of the games.

First up are the Cowboys in Laramie for a Friday night tilt under the lights of War Memorial Stadium (this is assuming the state of Wyoming has discovered electricity in the last year). The Pokes are heading home after an 0-2 road trip through Boise, Idaho and Logan, Utah. Wyoming always plays hard in the Border War. The natural and longstanding rivalry between the schools is bolstered by the giant chips on the shoulders of the many Wyoming players from Colorado high schools who were overlooked by CSU during their recruiting process. Some Colorado prep star on the Cowboy roster will have a career game on Friday. It happens every year.

With a four-win season getting closer and closer, it becomes harder to envision the 2020 football season with Mike Bobo at the helm. The question has been and will continue to be the timing of the whole deal. Bobo's buyout drops precipitously after the first of the year ($5.5 million to $3 million) so it makes sense to either negotiate a reduced early buyout with Bobo or wait until January 1st to part ways. Waiting puts the Rams in a bind from a recruiting standpoint, but this program is in need of an overhaul regardless of the timing. Bobo inherited a team that in 2014 went 10-3 and was ranked in the top 25 for a short time. All the program has done since 2014 is go the wrong direction. As someone who truly respects and likes Mike Bobo the person, I have finally reached the point where I think it is time for Mike Bobo the coach to be relieved of his duties. This garbage is not acceptable.