Nearly every element of a highway is intentional. Signs, pavement markings, barriers, shoulders, signals - they all have a purpose. I feel like most people understand this concept.

Also, I am not an asshole.1 Really, I am not.2 However multiple times on my daily commute, people automatically assume I am.

I design roads for a living. A professional roadie. As is true of any person in their chosen field, my career path has given me a greater understanding of the "why's" associated with my chosen profession. "Why is there guardrail in that location?" "Why does the traffic light operate that way?" "Why are roundabouts showing up everywhere?" "Why is this road construction lasting as long as it has?!!" (Obstruction in the clear zone, because of the interconnect with the adjacent signal, because they are 1000x more efficient than a signal a lot of cases, and road work takes time impatient people!)

On this divided highway, the median guardrail was installed between opposing traffic lanes to maintain separation of the vehicles in the case where a vehicle were to drive into the median. Easy.

Roadway design isn't that hard, is it? (No joke, every other type of engineer tells us this all the time. We apparently do the easiest engineering ever created.)

There is, however, one element that people refuse to understand its purpose. This element shows up everywhere on normal streets and in constructions sites and is misused 100% of the time. This confounding element is an ending lane of traffic.

Picture yourself in a construction zone. Traffic is backing up entering the cone zone. At the front of the line is a flashing sign with three chevrons telling you that the left lane is ending. What is the natural reaction of every human on the planet? Get into the right lane immediately.

Picture yourself on I-70 westbound approaching I-25. There are four lanes of traffic as you near the interchange. The left lane and left-center lane are through lanes continuing on I-70 WB. The right-center lane allows through movements to WB I-70 and turning movements exiting to I-25. The right lane is an exclusive exit lane to I-25. Which lanes does every single westbound I-70 vehicle use? The two left lanes.

Now take those same two scenarios and ride with me. Scenario #1: We are driving in the left lane as we approach a construction zone and the left lane is ending. Where do I go? Nowhere - I like that left lane. Scenario #2: We are driving westbound on I-70 approaching the I-25 exit ramp. Which lane are we driving in? The right-center lane. In both situations, I cruise past the logjam of vehicles in the occupied lanes and merge into traffic at the designated merge point. And this is why people assume I am an asshole every single day. In reality, I am not an asshole. They are just stupid.3

Just like the guardrail and the traffic signals and the signage, travel lanes are there for a reason. That reason is to efficiently move traffic from one location to another. By clogging up only some of the lanes, you are doing the exact opposite - restricting traffic unnecessarily. Since I do (pretend to) design roads for a living, let us take a look at what always happens when a lane drop appears. I, obviously, am the yellow car. 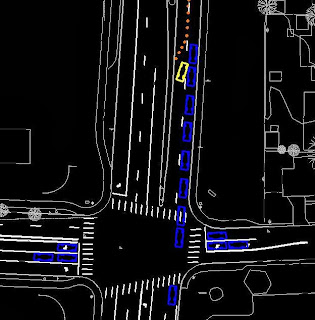 As you can see from this example, ten vehicles are attempting to go north towards a lane drop. There are six cars sitting on the side road that would like to either go north with the crowd or go E-W through the intersection. Because all the idiots got into the right lane, super idiot #1 is blocking the WB traffic from continuing on their ways, even if they have a green light. "But wait a second, Mike. No one would stop in the middle of the intersection and block traffic like that!" These words were actually uttered to me by NO ONE EVER because we all understand how IQ drops when behind the wheel of a car. Of course the intersection is blocked. Rude and moronic people do this all the time. Notice that as I am trying to get into the through lane (again, the yellow car), Johnny Jerkface in the second car is desperately trying to stop me from joining in the parade. This is also an accurate representation of humanity on the road. Even though I am attempting a maneuver that is completely legal, all other drivers do their utmost to ensure that I do not cut in line. To review this setup: I'm mad because no one will let me in. Car 2 is mad because he thinks I'm cheating. The cars going E-W are mad because they are stuck at a green light. And moron car in the middle of the intersection is mad because the cars in front of him are not moving forward and he is getting honked at. So much anger. 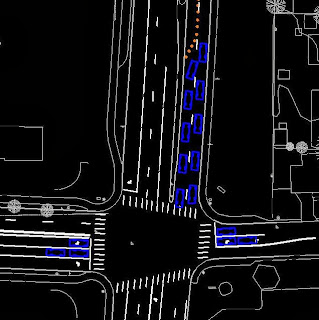 Now let us look at the same situation done correctly. Here we have the same ten vehicles going north and six going E-W. This time, the traffic is correctly using the dropping lane of traffic and the cars are proceeding into the cone area doing the zipper - one car per lane right at the merge point. Who ends up mad in this scenario? I am not mad because I am seamlessly merging into traffic without grumpy Johnny Jerkface trying to squeeze me out. Johnny himself is not mad because he does not feel cheated by any other drivers. The E-W drivers are not mad, because they will be able to move onward with a green light. All ten northbound drivers are happy because a fair and smooth system is in place to reduce delays. And the moron car in the middle of the intersection is not getting screamed at for blocking the intersection because he is not blocking anything.

At this point, can you possibly say that I am wrong? If you still have some doubt, I will let the Minnesota Department of Transportation close this up for me. Also, this video.


Now stop honking at me.